The management of the apartment I live in decided to encourage the residents to join in Earth Hour. We were to convene in the playground area, the 'heart' of our apartment block, sit around in the dark and munch on snacks as a community.

The committee president asked me to give a 'talk' to the children in the neighbourhood, which was pretty exciting. I ended up speaking to them about the whats, whys and hows of the event. 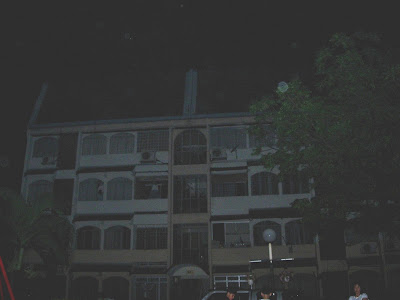 One of the apartment blocks in darkness.

I talked to the kids about how we use energy to power our homes and schools. I told them how electricity is made, and what the burning of fossil fuels means to the environment and the people, animals and plants that live on earth. I think I did okay, and the kids were so cute. I think some of them actually listened. LOL. 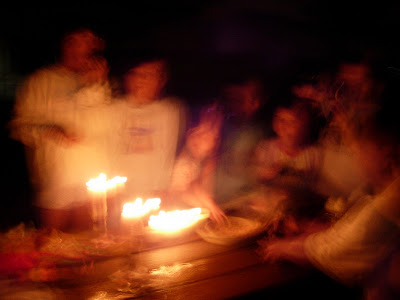 Kids munching away on tid bits by candlelight.


Of course, I came prepared and was armed with 'bait'. I kept a steady flow of 'keropok' (prawn crackers) coming, so they sat there munching, as I yammered away. I think I managed to single-handedly spoil the dinners of children from at least five different families. A great achievement, wouldn't you say?

Then, one of my neighbours brought along a few of her international students from Help University. I ended up leading an impromptu discussion on Earth Hour with them also.

My son was the least interested in what I had to say. He kept at least a 5-metre distance from me at all times - a clear sign that he's had enough of mummy's 'lecturing' at home perhaps. Oh well.

He was upset when it was all over though. He thought the 'party' was a lot of fun, and he said he wanted to hear me talk some more. He was probably just tired and cranky. I took him home, gave him a bath and put him to bed.