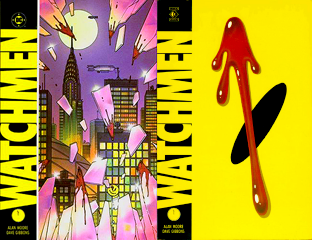 I encountered Watchmen probably through Empire magazine, which my husband buys all the time. When I first laid eyes on the costumed heroes of the movie version, I thought "Wow! Those guys look cool." Silk Spectre's latex costume, in particular, made my jaw drop. I mean, it looks "painful", how can she even walk in that thing? It's undeniably hot though.

Anyway, unlike my husband, who loves action movies and comics, I wasn't really keen on watching another movie about superheroes. So when it showed on our plane ride to Sydney back in June, I opted for Coraline instead. After all, I had been dying to see Neil Gaiman's work on the big screen, in stop-motion animation no less! But, I digress.

A few months ago, looking for something to lull me to sleep, I watched Watchmen upon my husband's recommendation.

I told my husband so.

Fast forward a few months, and I woke up one morning to a feeling of utter "revelation". I felt like I finally understood what the Watchmen movie was all about. It was weird, because I hadn't even been thinking about it. Perhaps images from the movie were subconsciously burried in my mind.

I began researching the characters, and sought to learn more about the graphic novel. I got to read a few pages of the comic online, and was in awe of the writing and visual style. I'm beginning to see why the world thinks Alan Moore is a genius (albeit, one who seems to hate everything, and has quite a few choice words for Hollywood).

I confess, I've never read a comic or a graphic novel, which I believed would only appeal to fan boys. I was wrong. This all reminds me of a lesson I learnt from Holly Black, author of The Spiderwick Chronicles. She had said in an interview that a writer should read everything they could get their hands on, even the back of ketchup bottles, because it'd improve their writing exponentially. It's common sense, I know, but my lack of awareness on comics, and the stereotypes I had perpetuated in my own mind, had held me back from discovering the medium.

But, now that I've discovered it, I feel so spiritually "renewed." My dear husband, suportive of my new found "obsession," got me the full set of Watchmen e-comics to read today. I've only managed to read a few pages, but I'm already so into them. Someday, I'm going to get the series for our home library.

Needless to say, I'm really excited about having found something new and exciting to sink my teeth into. It's all thanks to my husband, who has always known the joys of comics; venom-spitting Alan Moore, who believes his masterpiece is unfilmable; and the movie itself, which has been described as "a flawed masterpiece." I'd have to agree with that assessment, because the movie wasn't perfect, but I think Zack Snyder did a good job, and so did his cast of actors. If only they'd use a little LESS sex.

PS: My favourite Watchmen? Rorschach! Why? Because he kicks ass! Jackie Earle Haley was perfect as Rorschach, and that voice - OMG. He's made me a big fan, what an amazing actor! I want to see all his movies now, even the Bad News Bears, which was made the year I was born. Am I excited that he's playing Freddy Kruger? Oh yeah!
The Comedian comes in second... which is kinda weird, because I initially hated his morally-corrupt behind. He rapes women and shoots pregnant girlfriends, this is not a likeable character, but I guess I understand now that he is a parody of makind's savage nature. Jeffrey Dean Morgan was the perfect guy for the job. Very cool.
at September 11, 2009