I had the pleasure of watching Tim Burton's Alice in Wonderland with my family last weekend, and it was the first time I watched a movie in 3D, so it was quite a treat. As expected, the movie was visually stunning, and I enjoyed almost every minute of it. Almost.
This was a movie that I had been dying to see, as I love Tim Burton's work and I love fantasy. I must say that the movie did not disappoint, but it did leave me wanting. But first, let's focus on its merits. I loved the clothes on Alice (Mia Wasikowska) , they were stunning. The long tunic she wore during her stay with the White Queen was especially lovely.
Mia herself outshone her clothes. Looking like a younger and prettier Mona Lisa, she was a likeable heroine. I also enjoyed Anne Hathaway's performance as the White Queen. Her hands held airily to her sides in almost every frame, gagging now and again, she was charming.
It was also nice to see Crispin Glover act again. His Knaves of Hearts was good, though I felt that they could have given him a better eye patch.
Overall, I liked this revamp, as it is a fantasy with a female protagonist that isn't necessarily for girls. But, clearly, it did have a strong feminist element to it. You get a true sense of the escapism that Alice experiences, as she tears away from her Victorian corsets.
Sadly, the much anticipated performance by Johnny Depp was a little marred. Mr Depp, I feel, has played too many oddball characters for his own good. By now, we're confused as to who and what he's supposed to be. Some say his portrayal of the Mad Hatter was like a cross between Jack Sparrow and Willy Wonka. I sensed a bit of Sweeney Todd too. Still, he's Johnny Depp... we love him anyway.
I couldn't stand Helena Bonham Carter, which , means she did admirably as the brash Red Queen. I wished we could have experienced more of Alan Rickman and Stephen Fry, and, of all the voices Matt Lucas is capable of doing, why on earth did he settle for his Ting Tong Macadangdang one for the Tweedles?
Some say the movie is dark, as is expected of Tim Burton, but to me, it wasn't dark enough.
I also have issues with watching 3D when I wear thick, nerdy glasses. Glasses on glasses aren't comfy. But I will, most likely, revisit the experience nevertheless.
* Update 16 March 2010: Here's a little something I wrote for Venusbuzz on watching movies in 3D with nerdy glasses. 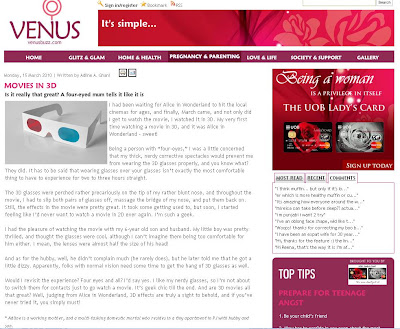