Clash of the Titans review 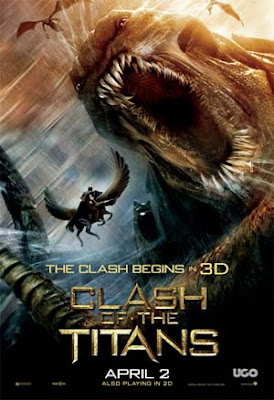 So I watched Clash of the Titans with my family, and I hate to say it, but the less than flattering reviews I've read on it have been spot on. I came away from it feeling kind of "meh," so I won't be giving this movie a long-winded review; instead, I'll just share a few things that I've learnt from this movie experience:
1. Sam Worthington has horrible-looking legs. Pete Postlethwaite (who plays his dad) has nicer gams.
2. Gemma Arterton is HOT.
3. Medusa is scarier when she DOESN'T appear on screen.
4. Ferocious, giant scorpions will have the speed of the average garden snail once domesticated.
5. Have I mentioned? Gemma Arterton is HOT.Yes, I have a girl crush.
6. Liam Neeson and Ralph (pronounced "rafe" please!) Fiennes, both fine actors, fell flat as "titans." Blame it on the bad perm/rebonding and facial hair.
8. We all know this already, but Greek Gods are a bunch of spoilt brats.
9. As such, we shall call this circus "Clash of the Squabbling Brats."
10. The monsters in the original movie were creepier. Yay stop-motion animation!
11. The guys in the editing room must have had to edit out lots of "upskirt" shots. Those were some skimpy ancient miniskirts.
12. We've established that Gemma Arterton is HOT, but who in their right mind would flirt on a creepy death boat in the freaking underworld? I mean, the boatman's a skeleton that's grafted itself onto the vessel... gross!
Now, I know there's no such thing as "underwhelmed" because "whelm" is not a proper English word, but one CAN be "overwhelmed"... so go figure. But anyway, I WAS underwhelmed... heck, my 6-year old son was underwhelmed. Percy Jackson and the Lighting Thief was actually more entertaining... sad.
Image via Wikipedia.
at April 06, 2010

not watching this one either. thanks lin!

Hi Kit! How are you? The movie WAS disappointing, but if you like special effects, you should still go see it on the big screen :)