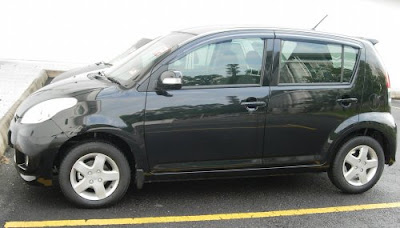 I used to be proud of the fact that we didn't have a car. It meant we weren't contributing to air pollution and that our carbon footprints were smaller because we used public transport. But, after 7 years of marriage, my husband and I decided to get a car. It's a first for us both. We received it the day before Earth Day, on April 21, 2010.
It became a necessity partly because we couldn't take commuting via taxis, buses, LRTs and KTMs much longer. With your own car, you can come and go as you please, and you needn't worry about delayed trains, non-existent taxis, taxis refusing to take you, rain etc. You also needn't worry so much about exposure to deadly viruses like H1N1. I mean, have you been on a train during rush hour? People cough and sneeze all the time.
But, really, the cost of using public transport became too much for us to bear. Thank you, inflation. My husband and I work in the same place, and we used to book a taxi to get to work so that we wouldn't be late. It cost us RM20 per trip. So that's RM60 for three days, and that didn't include commuting home from work or the need to use taxis on the weekend. Now, RM60 will buy us a full tank of fuel on our MyVi, and it'll last us a week.
For us, owning a car made financial sense. I still can't believe that we have a car. It's a humble ride, but we love it :) To learn more about the MyVi, check out the Perodua website.
at April 24, 2010

hi Adline. I think our transportation system in Malaysia is not up to par for us to not own a car at the moment although there has been initiatives. However, even by owning a car, we can still reduce our carbon footprints by acts like car pooling instead of driving alone. The other is to scrap old junk cars and get newer cars that's more environmentally friendly! Enjoy your MyVi! (We just drove home our new Alza last week! Just 1 car for us too!)

I hear you babyblogshopper! And congrats on the Alza! Thanks so much for dropping by!