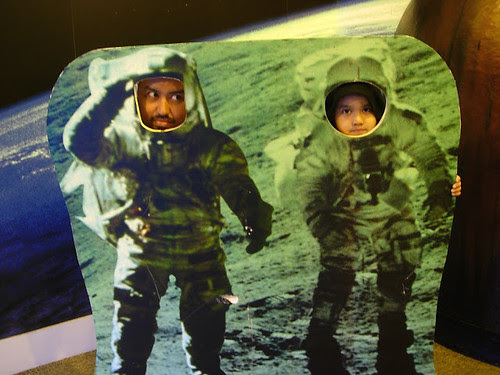 My 6-year old son, Amir, has been expressing an interest in planets and space exploration lately, and so his father and I took him to the National Planetarium yesterday. This would be our family's first trip there. We arrived at 11am sharp, just in time to catch a show at the Teater Angkasa (Space Theatre), which has an impressive dome-shaped screen.

The breathtaking film we saw, Passport to the Universe, was in itself worth the trip to KL on a busy Sunday morning. Narrated to great effect by Tom Hanks, and developed by the American Museum of Natural History and NASA, the show takes you on "an unforgettable voyage of billions of light-years, from our home planet and the Milky Way galaxy, to the edge of the universe." It was really awesome, and I'd definitely recommend it to anyone, especially parents! It's not expensive either, you only need to pay RM3 per adult and RM2 per child to see a show here. 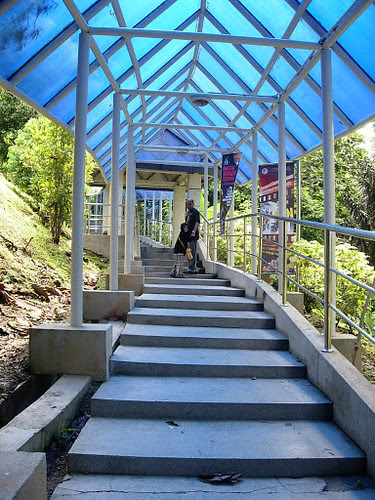 Working up a sweat.

The Planetarium, situated at the Lake Gardens, is pretty easy to get to, and once you're there, you shouldn't have much trouble with parking. Once you've parked, however, you're going to have to make a rather monumental climb up some steps. Kind of symbolic of going to space, I feel, and I was rather thankful for the workout, as I had a rather heavy breakfast! 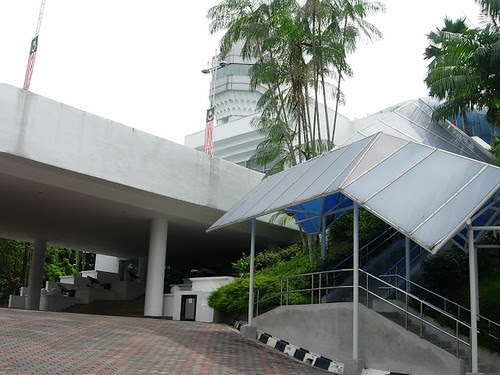 Main entry to the planetarium.

After making the climb, you'll be rewarded with a view of the planetarium building, but then you'll need to climb a few more steps to get to the ticket counter. I asked the guy at the booth if people with disabilities could just drive up and get down at the main building, as opposed to parking at the bottom of the hill, and he said they should definitely do that. But I’m not sure if the building itself has disability access. I didn’t see any elevators to the second floor, ramps in the Teater Angkasa or specialised toilets, but maybe they were there and I didn’t notice them.

Once inside, there’s quite a lot to explore. You could, for example, get up close and personal to a space rover on Mars and use a control panel to move its head, which contains a digital camera that can capture stills of you. 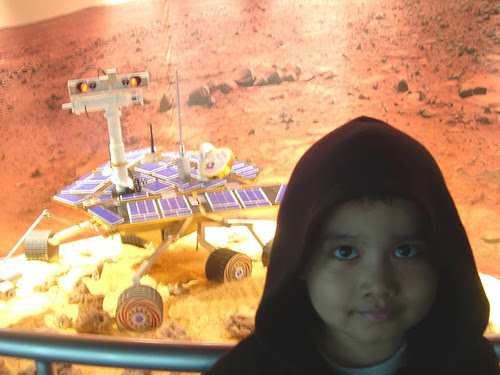 Here's my little jedi knight, not on Tatooine, but on Mars!

There’s also a glowing replica of the sun, which my son was drawn to for some reason. Here's Amir with the sun. 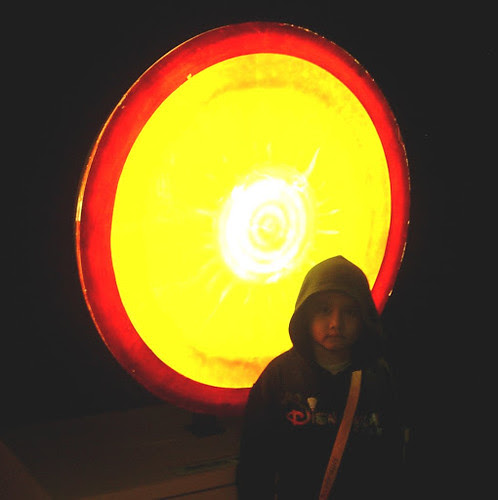 In another section of the exhibition hall, there’s a reconstruction of a space ship, which is meant to give visitors a feel for the Malaysian angkasawan’s living quarters while he was in space. My son pretended to conduct experiments on the space ship, listened to his heart beat and even tried out the space toilet. 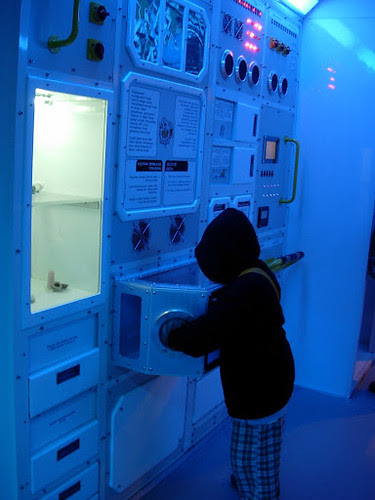 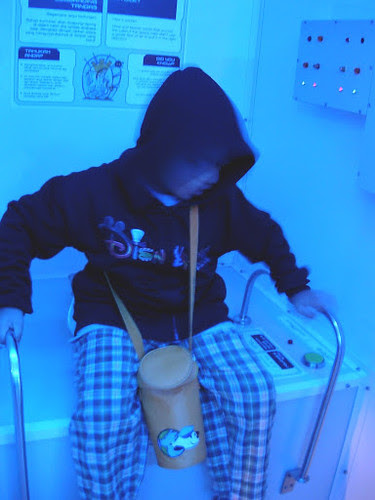 The adjoining room is full of cool space stuff, like what I think is a model of the Soyuz 1 space craft cockpit. 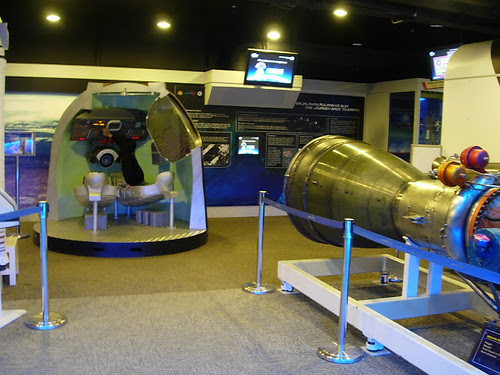 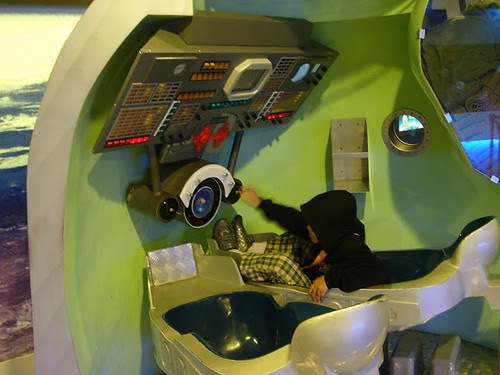 As we walked around the exhibition space, we heard a loud announcement (which startled my son) that the next show, Dawn of the Space Age, was about to start, and so we quickly got tickets. This show wasn't quite as fun as the first, but it was very educational. The space race was intense, and you get an idea of how insane it was through this show. 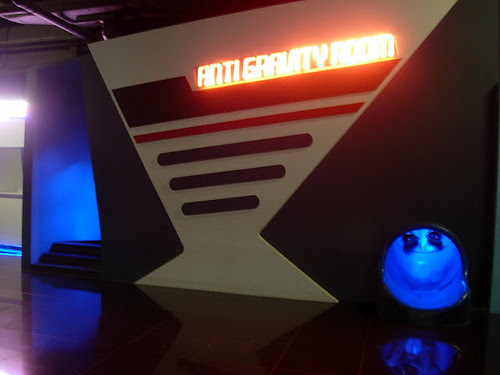 A must-try, the anti-gravity room 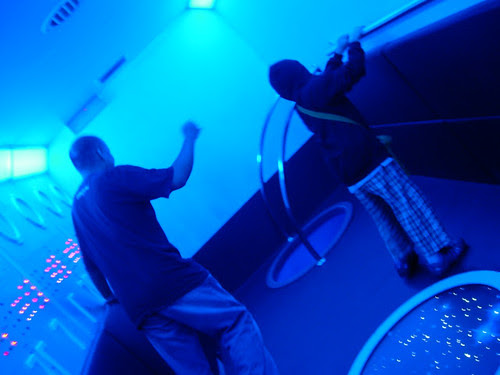 Wacky balance inside the anti-gravity room 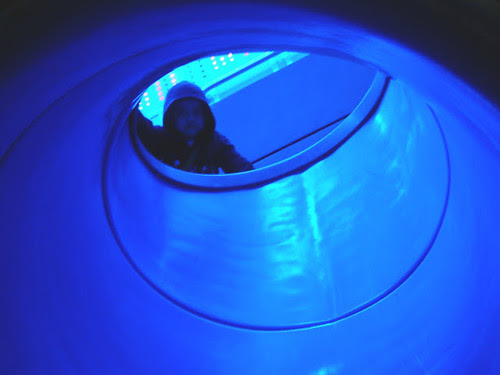 A cute alien at the end of the tunnel!!

After the second show, we left the Planetarium to make our way to the National Museum. As we knew the museum's parking lot would be full, we simply walked across the covered bridge, which connects both places of interest. 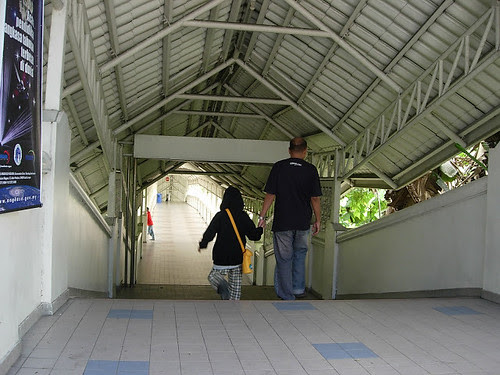 In conclusion, I think the National Planetarium is a worthwhile visit for families with children, especially if you’re trying to get them interested in science. Do spend some time talking to your children about what’s on display, and help them to explore their surroundings. If you do go to the Planetarium, do make a point to catch those shows at the Teater Angkasa, you really shouldn’t miss them! I hope you have fun!
at October 04, 2010

been a long time since I been at Planetarium.. seems a lot more exhibition being going on.. maybe, when my daughter a bit older so she can understood better