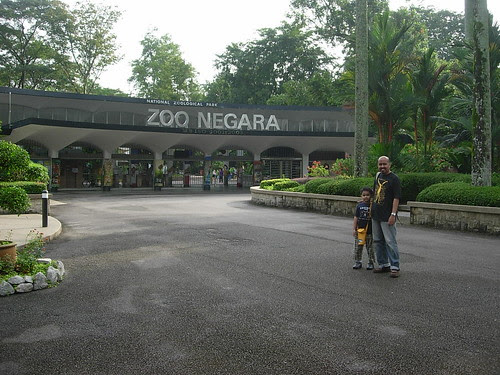 Amir and I love animals, so the family visited Zoo Negara together for the first time yesterday. I was particularly looking forward to seeing the insects, reptiles, amphibians and penguins, and although I'm sad to say that many parts of the zoo was a disappointment, there were a few highlights. 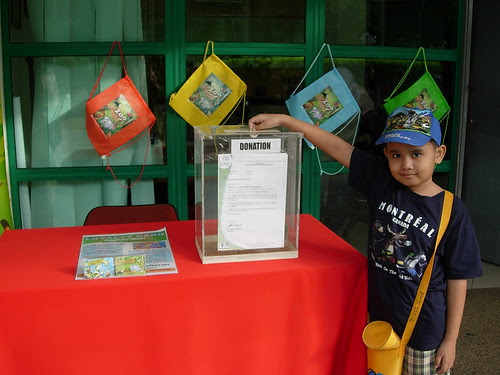 Near the entrance, there's a donation box for the Asian elephants that call Zoo Negara home. They need a new enclosure very badly, so do make a donation if you're there. 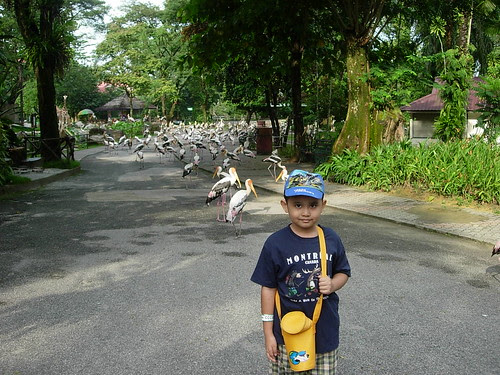 Not long after you've entered the zoo, you're bound to come across a huge flock of storks. It's pretty awesome to see so many big birds just hanging out in the open. 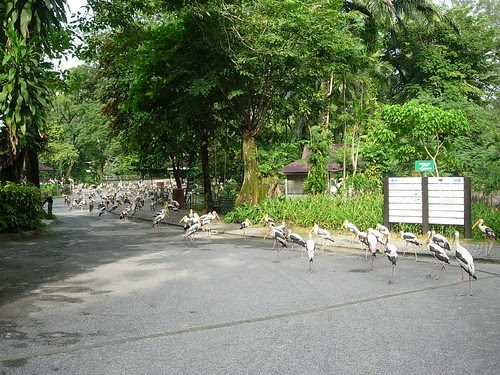 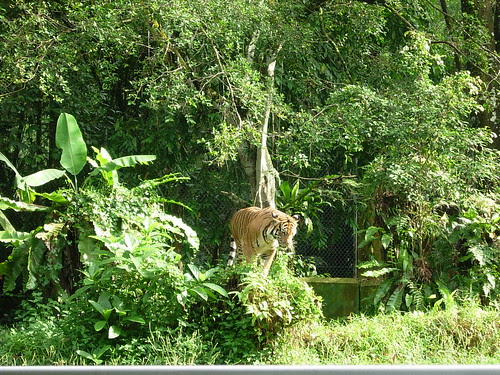 We got to see two Malayan tigers up and about in their enclosure. They were an amazing sight, but to be honest, I didn't feel like lingering because it felt like they could just jump over the barrier at us! 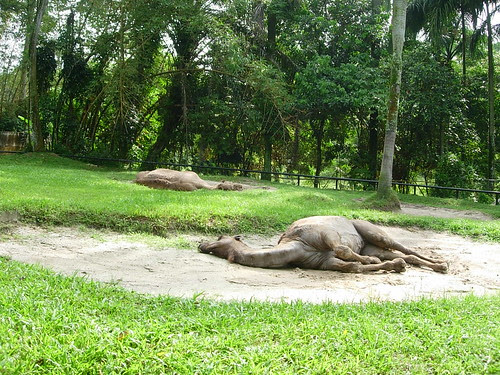 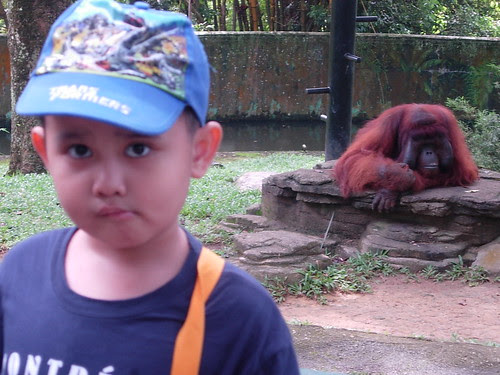 The orangutan were positively adorable, including this huge male specimen. His neighbours the chimpanzees, however, looked powerful and positively frightening! 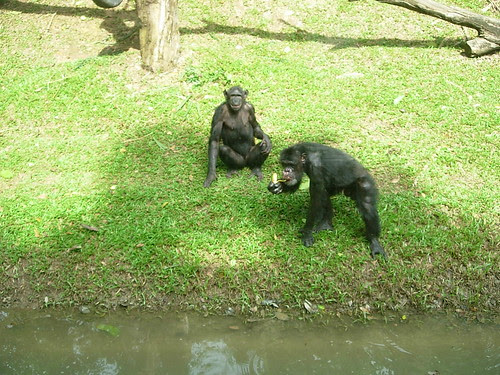 I mean, don't get me wrong, they're fascinating creatures, but I kept thinking about that poor woman who got attacked by a chimp in the US and how much damage they could cause someone. Still, Jane Goodall was in the back of my mind. Aren't they amazingly human-like? One of them is smiling at me! Well, they do share over 90% of our genetic makeup after all. 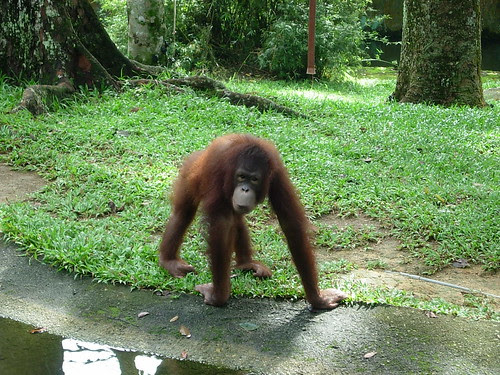 Just look at this adorable orangutan! It was checking us out. Moments later, one of the zoo staff started selling bananas for us to feed to the apes with at RM3.00. Then a group of rowdy schoolchildren came along and started pelting bananas at the poor orangutan and chimps. It was pretty horrible to witness. 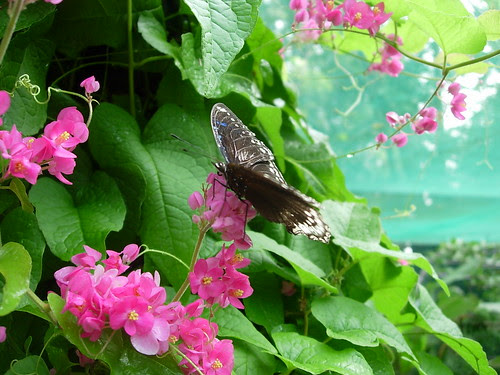 The insect zoo was something I was really looking forward to, but it was pretty horrible. To think we had to pay extra to see it! It's also hard to imagine that it was opened mid last year, why on earth  is it in such disrepair? The adjacent butterfly enclosure isn't something to shout about either, but we did spot some pretty butterflies. 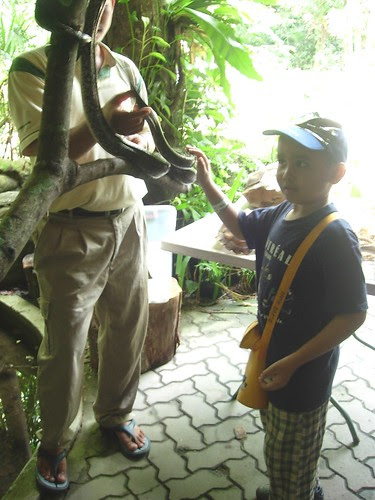 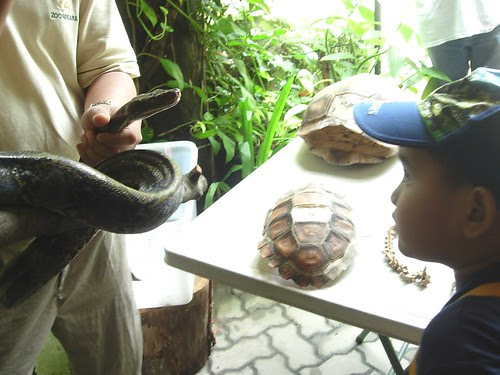 The reptile house looked a little like a haunted house if you ask me - dark and rather dank. We did get to touch a reticulated python, which is a gorgeous creature, but I don't think it liked the screaming schoolkids very much. I know I didn't. 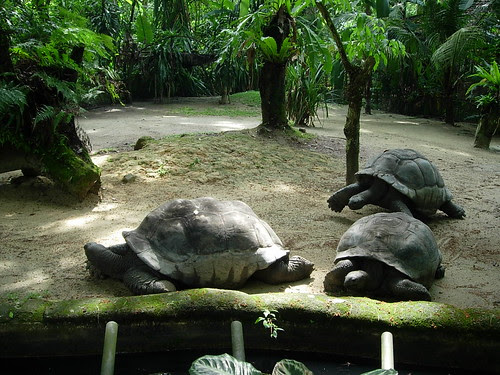 I don't know about you, but I love these giant tortoises. They're so cool!\ 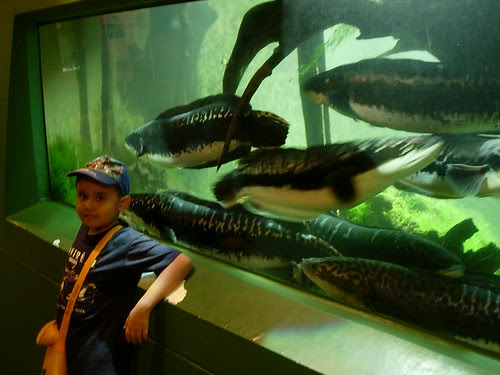 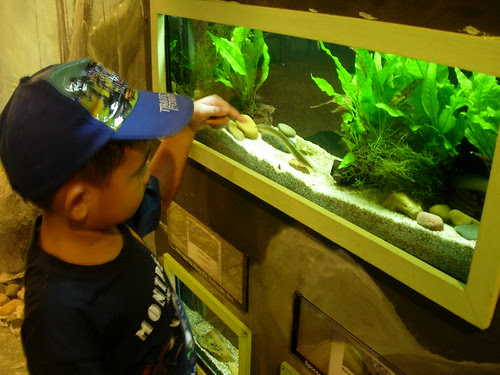 The aquarium wasn't as run down as most parts of the zoo, but heaven knows it needs to be spruced up. Here's Amir with a school of huge 'toman' and a tiny eel. 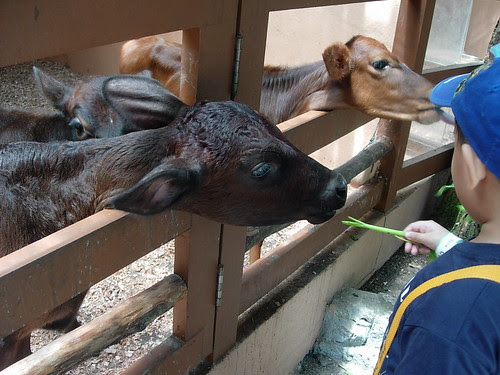 The entrance to the Children's World section of the zoo was pathetic, but inside were adorable creatures like calves, rabbits, kids (baby goats), a fawn and ponies. You can buy vegetables for RM3.00 and feed the animals. 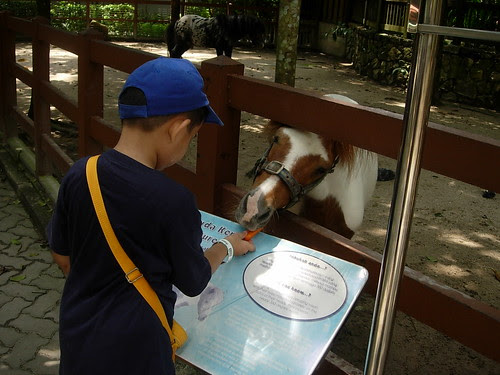 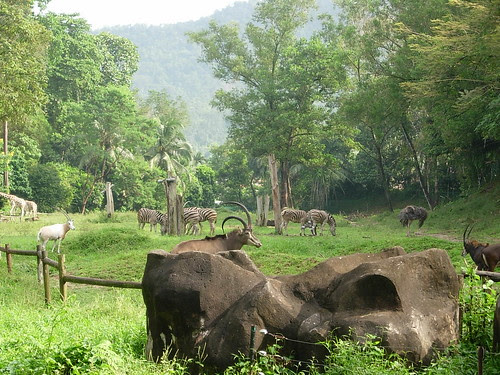 I think Zoo Negara is excellent in that, like other zoos, it gives us the opportunity to get up close and personal with animals, but it seems rumours about it being substandard, are unfortunately true. The worst parts of our visit included: Seeing exotic birds fight off rats that were helping themselves to the food in their enclosures (I wanted to take a picture, but the rats scattered once my camera was out. I think they might have an agreement with the management); the filthy primate cages; the filthy fast food restaurant, and the dirty windows at the penguin enclosure, which meant you could hardly see the penguins.

I am sure that the Malaysian Zoological Society (MZS), the NGO that manages the zoo, are doing an impressive job at  making do with what limited resources they have, but one's got to wonder, why hasn't the government done anything to help improve the 47-year old zoo? The Malaysian public and the animals deserve better! Still, Zoo Negara needs our support, and if you have the opportunity to do so, please do!

* Update 26.10.10:
Actually, after doing some online reading, I'm beginning to think that the MZS does deserve a measure of finger pointing!
at October 25, 2010

Hi Adline, My boy would have loved the Tiger - he tells me he wants to save the Tigers when he grows up, he's always had a special empathy for Big Cats but especially Tigers. Mind you, they are very beautiful animals, so I can understand why. Anyway, I wanted to say thank you for visiting my blog, saying hello, and posting some links - I really appreciate the gesture and support. Keep up the blogging! All the best Scott (whatimade.com)