Today Amir and I had lots of fun making and playing with homemade playdoh. To make uncooked playdoh, just mix a cup of flour with 2 heaped tablespoons of salt, add some water and a few drops of oil, and voila! I didn't have food colouring on hand today, so I added some turmeric powder to make my playdoh yellow. Incidentally, turmeric has antiseptic qualities too. If you like, you can add glitter or scented oils to your playdoh to make it more interesting! 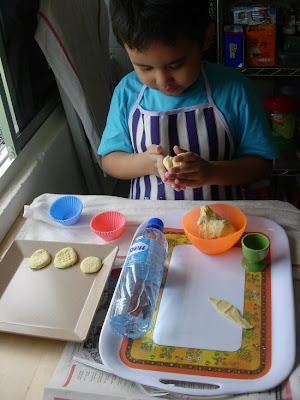 Doesn't Amir look like a pro kneading that dough? 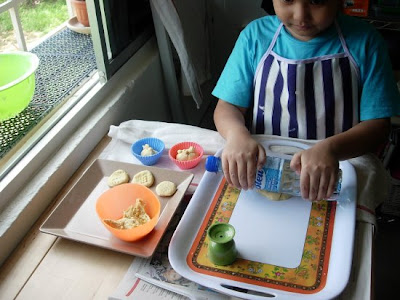 We used an empty water bottle that we filled with tap water to roll out the dough. 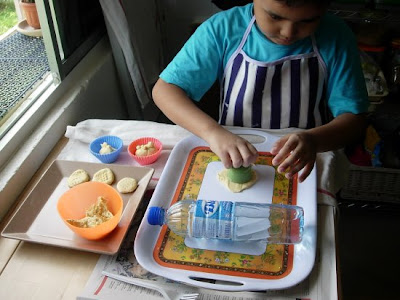 And, we used a plastic egg cup to cut out cookie shapes. 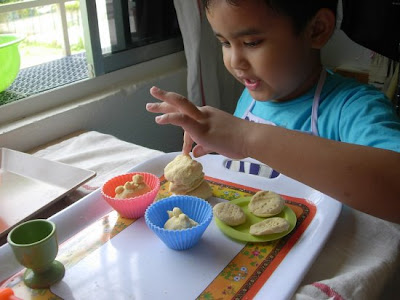 Amir made cookies, cupcakes and burgers. Here he is putting the finishing touches on his 'crabby patty.' 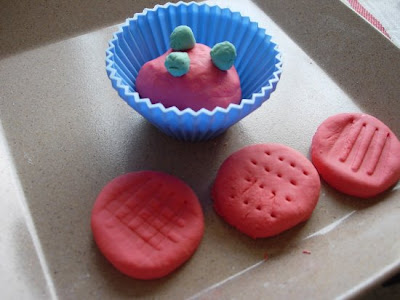 Although Amir didn't seem to mind that the playdoh was rather plain in colour, I suddenly got the idea to raid his craft box for some non-toxic poster paint to mix into the playdoh. Amir chose red and blue, but since I had mixed the dough with some turmeric earlier, the blue dough turned green :) 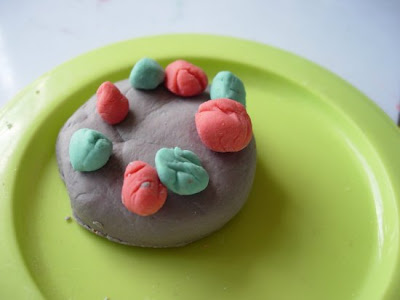 We mixed the red and green dough to make a grayish brown batch :) 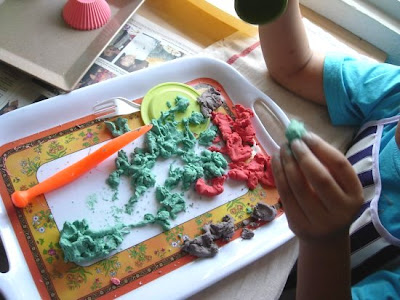 Of course, things didn't stay in order for too long,  Amir was soon having fun destroying the playdoh in what he described as a 'war zone.' :) I read online that you may be able to keep some types of homemade playdoh in a covered container for up to a month, but as Amir likes to decimate his playdoh, I prefer to make a new batch each time he wants to play.
I like to use uncooked playdoh because my son can help me make it, which is in itself a fun and messy process. But, if you want to try your hand at making cooked playdoh, check out this step-by-step guide at Instructables.com. Have fun!
at October 16, 2010

Email ThisBlogThis!Share to TwitterShare to FacebookShare to Pinterest
Labels: art and crafts

great idea.. got any measurement with that or belasah je like making cokodok?

Hi Junn, my basic recipe is: a cup of flour with 2 heaped tablespoons of salt, some hot water, a few drops of oil and a few drops of food colouring. Boleh belasah jugak la :) Can tahan about 2 weeks actually!