The editor of Best Buds magazine very kindly extended an invitation to the Peter Pan Gala Premiere at Sunway Lagoon to me and my family, and of course I couldn't possibly pass it up :)

Here's the invite. I found it rather amusing that some people actually turned up in green tights (for heaven's sake). 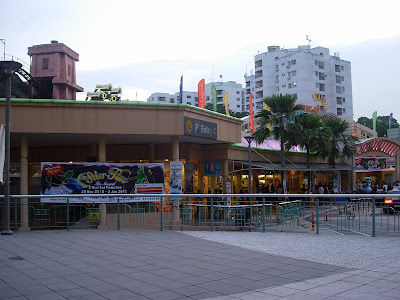 Here's the entrance to Sunway Lagoon. If you're familiar with it, and the adjacent mall Sunway Pyramid, you'll know that finding a parking spot here is sheer torment. Luckily, however, my husband's a miracle worker, so he found a spot. 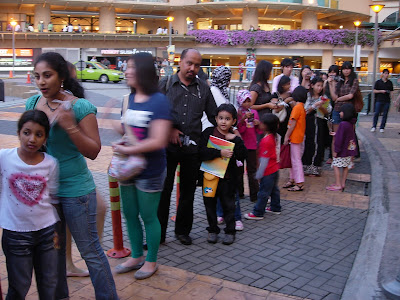 We arrived early, but there was already a long queue. As we found out later, there's quite a distance between the entrance and the amphitheater, and I'm not sure why, but they made us walk alongside the animal enclosures in the Wildlife Park, which I believe a lot of people weren't too happy about because, well... it stank... 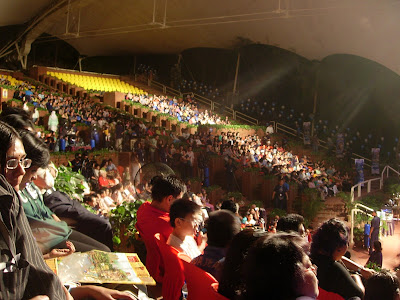 The show was held at the newly-refurbished amphitheater, which would be filled to the brim that evening. Those of us who got in early had to wait for more than an hour for the seats to be filled up by latecomers. Honestly, why can't people be on time? But then again, they probably couldn't find anywhere to park, so it's not entirely their fault. At one point the audience actually booed when an announcement was made that the show would start in 5 minutes... for the second time. I thought that was rather rude. for them to complain, after all they're there for free, so how about a little patience? Truthfully, however, waiting for more than an hour on hard plastic chairs with restless children is no walk in the park. 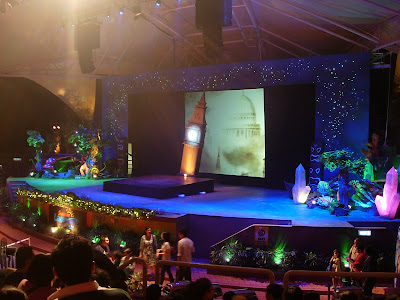 Anyway, I found the set, which I believe was designed and constructed by the Sunway Lagoon team, to be truly impressive. The set changes throughout the show were done very smoothly, so kudos to them! 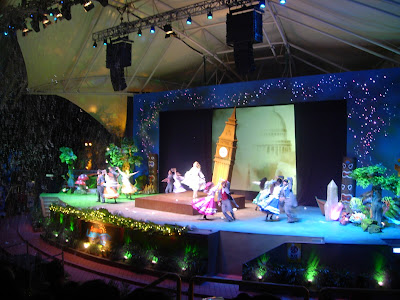 The stars of the show are Mark Iles, who plays Peter Pan and LJ Neilson, who plays Wendy. They were absolutely fantastic that evening. I felt the sound system didn't do their voices justice at times though. It made it sound like they were shouting the high notes, instead of singing them, which I'm sure is something they wouldn't do.

Performing alongside the main cast were several Malaysian dancers, who did an admirable job. If I had just one complaint, it would be that some of the female dancers' outfits were a bit too revealing for a family-oriented show. You don't have to be conservative to know that all that skin is gratuitous, exploitative even, but that's just my opinion.... and I get it, it's show biz. 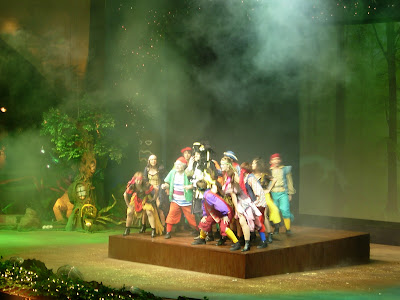 But back to the show... I found the actors who played Captain Cook/Mr Darling (Micheal Morgan) and Smee (Peter Jamieson) very engaging. I loved their performances! Here they are with their pirate crew. 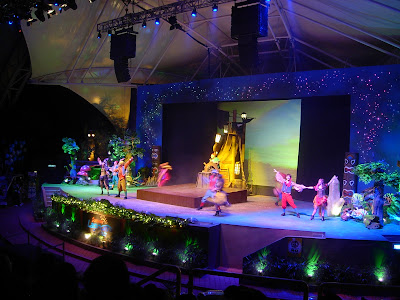 It wasn't easy to get pictures because my camera's pretty crummy and of course, there was a lot of movement, so sadly I didn't get any shots of Peter and Wendy in action. But whenever the dancers remained still enough for about 2 seconds, I snapped away! Note how the clock tower has morphed into a ship in this set. 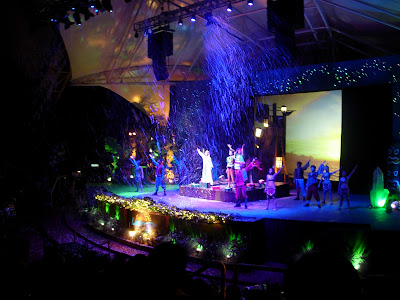 Here's the finale... there's a bit of 'snow' pouring down as you can see. Overall, I'd say the show was fun to watch. The director (Chris Colby) and choreographer (David Kort), as well as the cast and crew did a fine job. The creative team also deserve recognition for including Malaysian dancers in the production and for encouraging performing arts here.

This is the first time I'd had the pleasure of watching a musical live, but I came away with the feeling that this particular show would have worked much better indoors, perhaps in an auditorium. Still, I feel it's a show worth watching, especially if you're looking for something to do with the kids this school holidays. If you don't have kids, you should still just go and enjoy being a kid yourself for a bit!

The Peter Pan Musical at Sunway Lagoon  will be on from 26 November 2010 until 2 January 2011, and I must say that I'm amazed they're performing two to three shows a day! OMG! If you'd like more details, just click here.
PS: I found Mark Iles' blog today, and he has some interesting thoughts about his experiences behind the scenes, so do check it out.

Update Dec, 1: I've just received this fabulous promo shot of the stars of the show, courtesy of Nikki of Go Communications. Thanks Nikki! 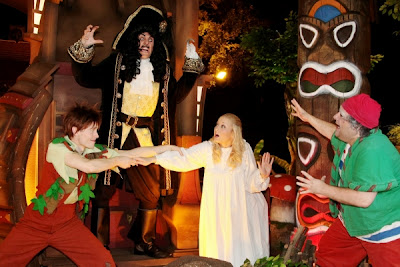