Hi everyone! We just got back from our first family trip to Port Dickson. After some online research, we decided to stay at Bayu Beach Resort, which suited our budget. Since we couldn't find a lot of info online about this resort, I thought I'd share my pictures and a few tips. Hopefully you'll find it helpful if you're planning a trip to PD. 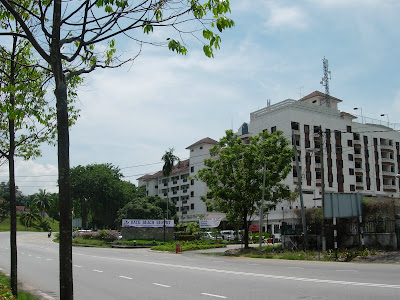 Here's the entrance to Bayu Beach Resort. Thanks to our trusty GPS, it wasn't hard to find. It took us about 2 hours to drive from PJ to PD. We weren't going very fast, around 80-100km per hour. Biar lambat, asal selamat! 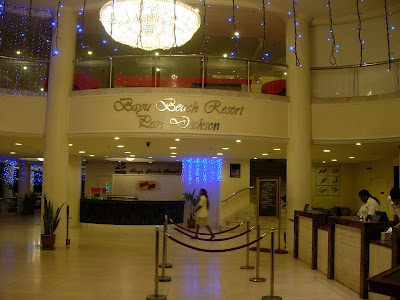 This is the lobby at night. I found the front desk staff to be nice and polite, unlike some other 3-star type places I've stayed at - a definite plus point in my book! We arrived at 12 noon, but thankfully there was a room available so we could check in immediately. 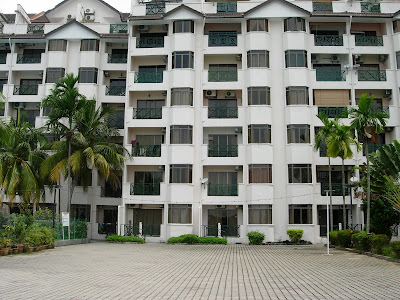 This is the block we stayed in. We were lucky to get a room on the ground floor, which had easy access to the pool, restaurant and lobby. 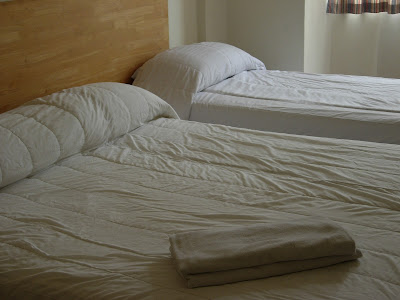 Bedrooms - As there are 3 adults and 1 child in our family, we took the 2-bedroom apartment. The room above is the master bedroom, which comes with a small bathroom. As you can see, there's a queen-sized bed and a single bed, so this room can fit three. 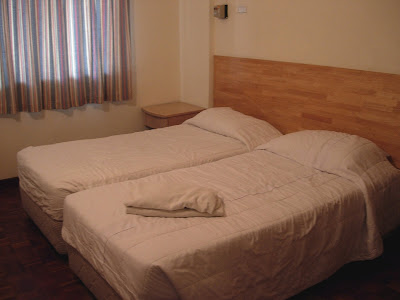 The second bedroom has two single beds. The beds were comfortable and both bedrooms and the living room were air conditioned.
Bathrooms - The unit had 3 bathrooms, which were clean, but nothing fancy. The first one in the master bedroom had a shower, sink and toilet; the second one near the living room had a bathtub, sink and toilet; and the third one near the kitchen had a sink and shower. When we arrived, the lights in 2 bathrooms burnt out on us! I called housekeeping and they came to fix it in about 5 minutes, which was impressive! The sink in one of the bathrooms was pretty noisy, which scared my son. But since it's an old resort, I kind of expected it. 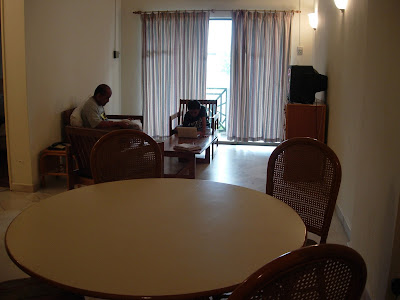 Living room - It's spacious, but very basic. Bayu Beach isn't for you if you're hoping for something more 'posh'. The floors felt very sandy, even before we went to the beach, so we called housekeeping and asked for a broom! 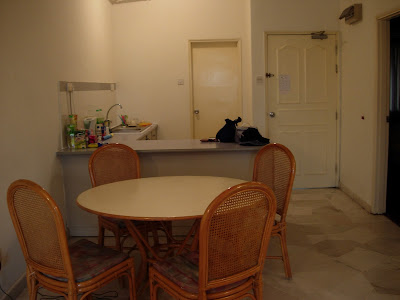 Kitchen - Here's a view of the entrance, dining area and kitchen. The opened door on the right leads to the second bedroom. The door behind the kitchen leads to the third bathroom. There's no cooking in the unit, but there is a kettle and mini fridge. Do bring your own supply of bottled water, beverages and snacks! 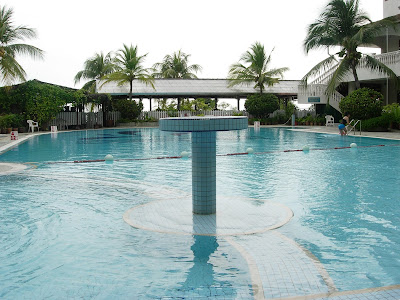 Pool - The pool's where my son spent most of his time. The kiddie pool is quite big :) 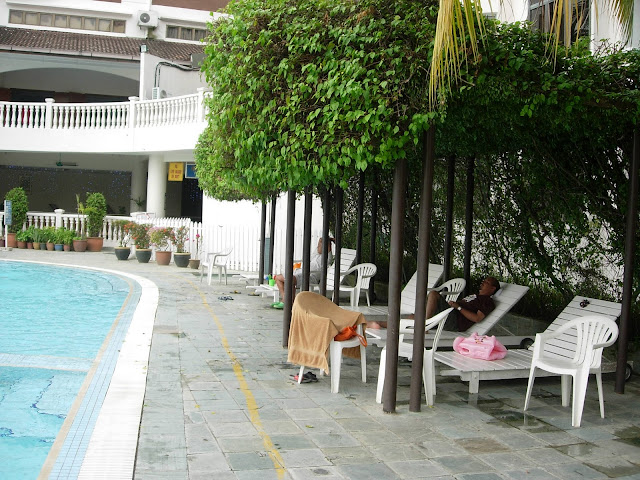 Parents can stay out of the sun under this shady plant thing. 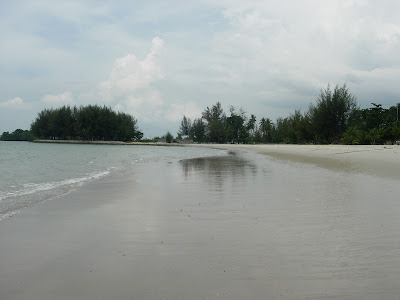 Beach - Bayu Beach resort claims it has 'the best beach in PD,' and I think they may be right. The sand is powdery and the beach is clean, although there's evidence of litter from previous 'family day' type events like balloons and plastic bottles. Bayu is a popular place for companies to host family days apparently. We did see someone cleaning up the beach, so that's a plus point. 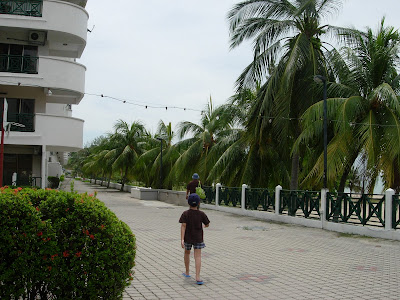 The beach is just a short walk away from the apartments, like 2 minutes tops. 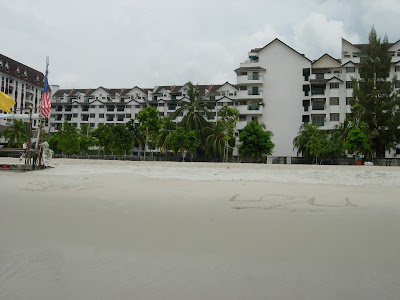 Here's a view of the resort from the beach. 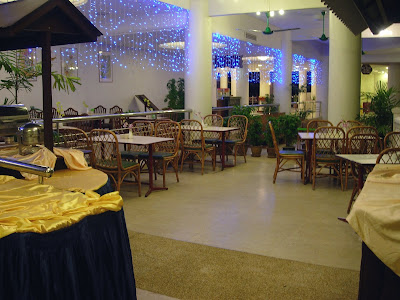 Restaurant - This is the resort's terrace-styled restaurant. The staff were attentive, but service at dinner was quite slow. It took about 15-20 minutes for our food to arrive.

Wifi - They do have free Wifi, but only at the restaurant during its operating hours. If your room is quite far from the lobby, honestly it can be pretty creepy walking to and from the lobby at night. 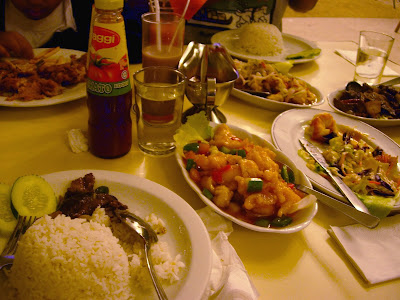 Food - The portions are big, but I wouldn't recommend the sweet and sour fish, Thai-styled chicken or cendol. They were rather bland. Their black pepper beef, roast lamb and Singapore fried mee hoon was good though. 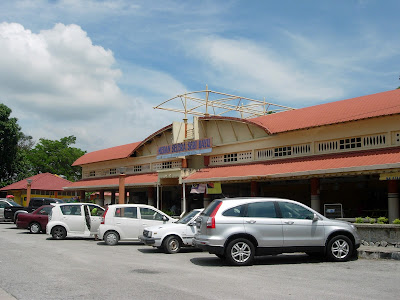 Other food options - Across the street from the resort is a food court that sells mainly nasi campur. The food isn't anything to shout about, but at least you don't have to go far. There were a lot of flies though, which is a huge turn off! 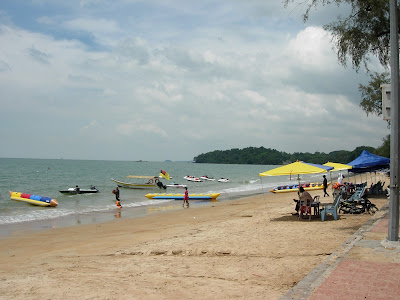 Beyond Bayu - If you're itching for some seaside activity, head to Teluk Kemang, which is less than 10 minutes away by car. I imagine it gets quite lively and crowded here on the weekend and school holidays. There's boat rides, banana boats, jet skiing... that sort of thing. The beach isn't very nice though, there's traces of oil all over the water's edge. There are lots of stalls nearby selling swimwear, t-shirts, mats, hats, kites, floats etc. There are also lots of food stalls here.
About 1 km from Bayu Beach is the Muzium Tentera Darat (Army Museum), which my son really wanted to visit, but it was closed on Mondays and Tuesdays. We must swing by next time where in PD. I think the ostrich farm is also worth a visit :)

Conclusion - We were there during the non-peak season, so the stay costed us RM290 per night, this is inclusive of tax. Would I stay here again? Probably, but I think next time around I might seek another resort just to experience something different. I wouldn't mind paying a bit more for a few more "trimmings."
at November 03, 2011

Was there wifi there?

Yes, but only at the restaurant.