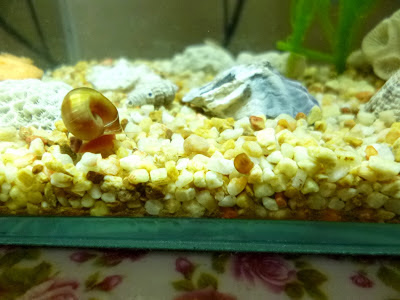 The smaller brown circular object on the right, pressing up against the glass, is a baby snail :)

A few weeks ago, I was super excited to see my ramshorn snails laying eggs. Then, the eggs hatched into teeny tiny specks. I was concerned that my apple snails would eat the baby snails, either deliberately or accidentally. So, to give the baby snails a fighting chance, I moved the apple snails out. At first, it seemed like the baby ramshorns didn't make it, but after some time, I started seeing a few baby snails! They're getting bigger each day! If you have ramshorn snails and can't seem to find the babies after they've hatched, don't worry, it's likely they're hiding out in the gravel. Smart little things!

I also realise now that I had made an amateur aquarium-enthusiast mistake - overstocking my tank! I've learnt that you can't have too many animals in your aquarium. I had started noticing small worms crawling all over the glass (eewww!!!). I read in aquarium forums that it's a sign of poor water quality. So, to resolve the issue, I found new homes for 2 of my golden apple snails and kept just the magenta one. I also had to clean my tank throughly. Note to self, apple snails poop - a lot!

Some time ago, one of my dwarf gouramis succumbed to fin rot, but I decided not to get a new fish. So far, with just one apple snail, one dwarf gourami and a few ramshorns, the water quality has stayed good. I see a few worms sometimes, but I get rid of them with a soft toothbrush. I've also learnt to fed my fish and snails sparingly to keep waste down.

I started keeping an aquarium to help me relax, but I sure did encounter a few stressful moments, all due to my own mistakes. But, like everything else in life, you live and learn. It makes it all the more enjoyable in the end :)

PS: I've just ordered some marimo balls, 2 trumpet snails (they're small) and some duck weed from a blog called Penang E-Aquarium. I'll let you know how that turns out!