Adventures with Autism: Realisation and reaction

My second son Arif, who is now 2 and a half years old, was born premature at 33 weeks. He was also small for his gestational age, weighing 1.36 kg at birth. He also suffered a 2nd Grade Intraventricular Hemorrhage (IVH) that left scars inside his brain. When I first saw him a few days after he was born, his head was so soft, it looked like a partially-deflated beach ball. 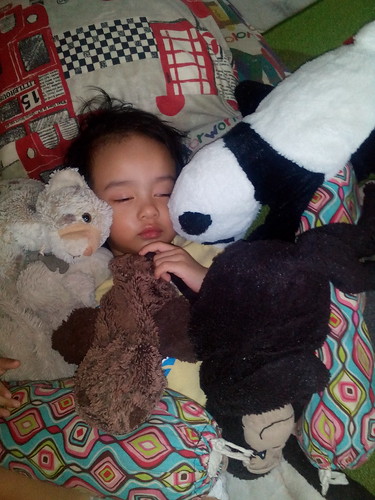 Arif and his bunch of favourite softies.

When he was about 3 months old, we took him to the hospital for a scheduled ultrasound of his cranium. They saw what they thought was a subdural effusion and he was immediately admitted. They told me there was fluid on the exterior of his brain and it was either spinal fluid, blood or puss. A few agonising days passed and he had an MRI done on the third day of Aidilfitri. That evening we were told that there was nothing wrong with him after all.

He then started going for monthly occupational and physio therapies at the hospital. Arif hated them and always cried the hour away. So basically we couldn't get him to do anything. Frustrated, we pulled him out of therapy and started doing it ourselves at home.

The first year of Arif's life was pretty much blissful. But due to his medical history, I knew he was at a high risk for autism. I watched him grow from strength to strength and reach many of his milestones. He never ceased to amaze me because since he was in the womb, he has been a fighter. But as the months passed, we noticed that he still hadn't spoken a word. We hoped that it was just due to his prematurity and that he would eventually catch up.

After he turned two, I started noticing certain 'odd' things. I did some online research and realised these were signs of autism.

He doesn't respond to his name or make much eye contact.
He doesn't point or wave.
He doesn't play with toys appropriately (role playing).
He doesn't like to have his teeth brushed.
He dislikes most foods and prefers to drink milk.
He throws epic tantrums for no reason and when I try to calm him down he's even more frantic.
He starts having meltdowns in public areas.
The list goes on.

When I came to realise that my son was autistic, because the signs were undeniable, I basically cried for two full days. It wasn't because I couldn't accept God's will, but it pains me to see him struggle. The more I learnt about autism, I realised that I had to let go of any dreams that I had for Arif and set new ones.

Around the same time, I was hit with the news that a dear friend has passed away suddenly. So for a while, I alternated between being on the verge of tears to feeling completely numb. Nevertheless, I was in problem-solving mode. What do I do? Where do I go? How much does it cost? A million questions came to my mind.

I immediately joined the Autism Malaysia group on Facebook to ask the parents there about my best options for diagnosis and therapies. I googled and called up the various autism therapy centres near my home to find out more about their specialists, waiting lists and fees.

I then learnt that therapies for autism at private centres was expensive, around RM150 per one hour session. And usually, there's two sessions per week. Public hospitals could only offer once-a-month therapy sessions, which is hardly enough. Where was I going to get the money to get him the therapies he needs?

I'm a freelancer and I'll need to do less work to be able to take Arif to therapy and to work with him at home. Money was becoming a major concern for me. So I decided that I would sell most of my prized vintage pyrex collection that I had amassed over the past few years. Fortunately, I was able to sell quite a bit. The money I earned could help pay for the first few weeks of therapy. 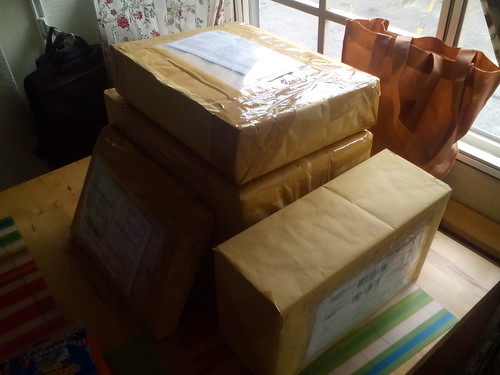 Just some of the many boxes of stuff that I sold online, waiting to be picked up by the courier service.

However, to keep myself sane, I needed a hobby. As an ex-curator, I love objects with great design. Therefore, I rekindled an old (and much cheaper) hobby - collecting decorative tins. ever resourceful, I was even able to sell some of the tins I found for a profit, which helped add to Arif's therapy fund.

I discovered through support groups that if I went to a public hospital, I would probably have to wait weeks or months to get Arif his diagnosis. Therefore, I decided to take him to a child development specialist at WQ Park, Kelana Jaya. We met with Dr Raja Juanita, she saw Arif and diagnosed him with Autism Spectrum Disorder (ASD). She also passed us a form for us to register Arif as an OKU (Orang Kurang Upaya/ Disabled Person) or the more PC terms Orang Kelainan Upaya (Persons with Different Abilities).

Yesterday, my son was just a 'normal' kid. Today. he's a 'disabled' one. At least on paper. But in my eyes, he has always been perfect. 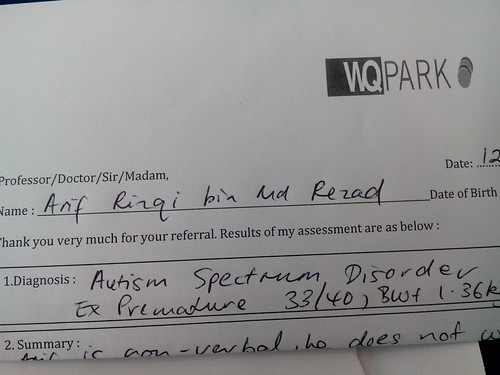 This piece of paper gave me a sense of relief. We now have a diagnosis.

When I broke the news about Arif's autism diagnosis on Facebook, many friends and family members told me that since I could write, I should share my experiences with others, because maybe it would help someone out there. While the thought had crossed my mind, even before anyone suggested it, during the first few weeks of receiving the diagnosis, I was in no position to discuss how I was feeling or what I was going through.

I was exhausted. I was relieved that I had a diagnosis, but I was emotionally and psychologically tired from all the frantic fact-finding. I needed some time just to let it all sink in and let it go.

Now, I'm pretty much done with crying and sadness. I don't have time nor energy for that. Instead, I'm keeping myself busy and I'm determined to take this all in my stride. I am thinking and feeling positive. All systems go! I am a proud autism mama and my son Arif is my hero!
at October 24, 2016