Brotherly bond: Watching in awe as their relationship develops 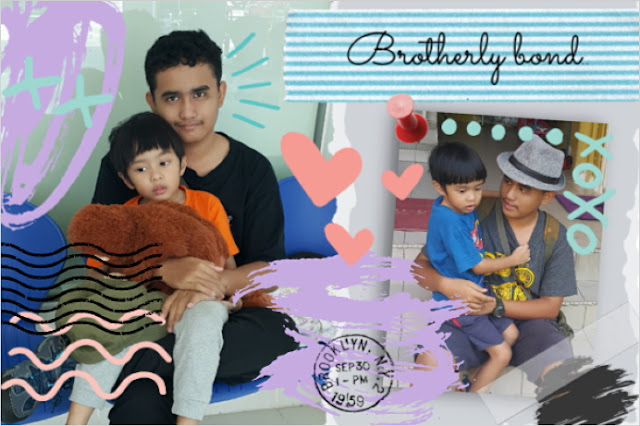 
Oddly enough, my earliest memory of the bond between my two sons is one where neither of them was present. In fact, they hadn't even met each other, so a bond was nonexistent. I'd just been discharged from a long stay in the hospital, due to pre-eclampsia and an emergency c-section. Arif, who was a low birthweight premie, was still being held in the Neonatal Intensive Care Unit (NICU), so when I went in for my postnatal check-up, I was by myself.

As I sat in the waiting area, I observed a couple seated across me. The mother was cradling a newborn in her arms and they had a little boy with them, he must've been about 5. It was obvious to me that this boy was smitten with his baby brother or sister. Instead of staying quietly in his seat, he stood up, positioned himself near the baby's head and gazed at the baby adoringly. Here and there, he would steal kisses on the baby's head.

I say 'steal' because his mother kept shooing him away. But he was unable to help himself and after one gentle peck too many, his mother scolded him and told him that he was disturbing the baby. At that moment, I realised how easily adults tend to brush aside life's simple pleasures.

I thought to myself that the lady didn't know how lucky she was. I wished Arif was in my arms. I wished Amir had met his baby brother and fallen in love with him. I hoped that my sons would have that beautiful brotherly bond.

Fast forward about a month later, my boys finally met when I brought Arif home. Amir, who was 10 at the time, had initially been very excited at the prospect of becoming a big brother. But it would seem that Arif's delayed homecoming had fizzled the excitement a bit. There wasn't much room for physical tenderness between my boys. Arif was so small and fragile at the time that Amir wasn't allowed to touch him for the first few months. So I'd have to say that their bond wasn't sealed from the get-go. It also didn't take long for Amir to start becoming jealous of Arif, who was getting all the attention (I can't say I blame him).

But as time progressed, things did get better. Like other brothers, they liked to have pretend sword fights and roughhoused. Amir would give Arif piggyback rides around the living room. But they weren't really, really close. Amir was away at school for most of the day, and due to their big age gap, they didn't really have that much in common. Forging a bond was also especially challenging because Arif has non-verbal autism. This means my boys can't verbally communicate or understand each other.

Arif didn't seem to welcome physical affection from his big brother either. Amir would lean in for a kiss or a hug, for example, and Arif would push him away. Though he's very affectionate with me and my husband, Arif didn't seem interested in bonding with his older brother. Meanwhile, Amir, who's naturally talkative, didn't really know how to connect with his non-verbal, much younger brother who kept pushing him away.

For quite some time, I didn't know if my boys would ever grow close and develop a satisfying relationship, despite the odds. This worried me, because someday, when we're gone, Amir would be taking care of Arif. He needs to understand and connect with Arif, and Arif needs to learn to trust him. I figured one way for me to help build their relationship, was to help Amir understand his brother first.

At opportune moments, I would talk to Amir about autism and explain things to him bit by bit. I had to be mindful not to overload him with things, but my goal was to help him realise what things are like for Arif. I wanted him to know that there is much we can do for Arif as a family. I taught Amir that from an Islamic point of view, having a sibling with autism isn't a burden, but a gift.

I also tried to understand things from Amir's point of view. Siblings of autistic and special needs children often experience their share of stress and anxiety too, and I've seen evidence of this in Amir.

But then, this month, something AMAZING happened. Since it's the long, year-end school holiday, my boys are together a lot more, sharing the same space. But unlike the holidays before, something seems to be different and more positive.

Amir has become more relaxed around Arif, attentive to his needs and better at engaging his little brother, despite the lack of verbal response. In turn, something seems to have 'clicked' in Arif as well. He has begun to take notice of Amir, and genuinely wants to be close to and affectionate with his big brother.

I watched in amazement as Arif voluntarily climbed into his big brother's lap, and sat there as we waited for our Grab ride. I observed that after Amir gave Arif a kiss, Arif kept  pulling him close again and again for more kisses. Today, Arif pulled his brother's arm and asked him to sit with him, so that they could watch Monsters Inc together on the couch. Arif even teased his big brother by dangling a piece of garlic bread in front of him, then giggled as he pulled it away.

Soon, Amir will start school again and Arif will be seeing his brother a lot less. But the interactions I've observed in these past weeks have given me hope that my boys can develop a strong bond and meaningful relationship that's built upon love, mutual understanding and trust. It may have taken a while for them to gain momentum, but my maternal instincts are telling me that this train is now full steam ahead.

I watch in awe as their relationship develops and I'm so grateful for these moments. I certainly won't be taking these simple pleasures for granted. I will celebrate each and every warm moment they share. Every smile. Every giggle. Every touch.

If you'd like to understand what its like for autism siblings, I think this article on Autism Society will be helpful.
at December 20, 2018

Email ThisBlogThis!Share to TwitterShare to FacebookShare to Pinterest
Labels: adventures with autism, family and home