Too painful to bear

I don't usually post articles I've written for Venus on my blog before they are published on the website, but I simply have to share my heartbreak over the senseless deaths of children that have been reported in Malaysian newspapers in recent times, so here goes....
As I read the papers this morning, my heart fell to pieces; yet another innocent child has been lost to a despicable, violent act; and as a parent, I am left wondering what the world has come to and about the safety of my own child. I fought back tears as I read that 18-month old Hareswarra was murdered by someone his family had trusted – their former babysitter’s husband.
Why? Why on earth did this have to happen?
It seems that in the 10 minutes that the toddler was with the man, the little one was beaten and physically abused so severely that he succumbed to his injuries upon arrival at Universiti Malaya Medical Centre. Worse still, this heartbreaking news comes barely a week after the nation was shook by reports on the death of three-year-old Syafia Humairah Sahari at the hands of her mother’s boyfriend. Post-mortem results revealed that like little Hareswarra, Syafia had suffered internal injuries and bleeding, as well as bruises and scratches to her body.
Unfortunately, this wouldn’t be the first time that we’ve heard of a Malaysian woman’s boyfriend murdering her child. In October 2009, a Sudanese man was accused of sexually and physically abusing, as well as murdering the three-year-old daughter of his girlfriend. The little girl died from her injuries when she was brought to Kajang Hospital after falling into a coma. Perhaps even more shockingly, the girl’s mother abetted in the murder by lodging a police report citing her domestic helper had tortured her daughter.
It would certainly seem that some women would care more deeply for their good-for-nothing boyfriends than their own flesh and blood, and this case is a painful reminder of the needless death of four-year-old Shearwey Ooi Ying Ying, who was also killed by her mother’s boyfriend. In an effort to conceal the murder, the girl’s body had been the burnt, and her bone fragments scattered in at least four different places. Shearwey’s mother, who had earlier made an impassioned plea to the public to help find her daughter, was later found to have helped her boyfriend dispose of her body.
There is simply no explanation that would make any sort of sense for such horrible acts of cruelty. Instead, we are left to grapple with the harsh reality that such irrational acts of violence against defenseless children continue to happen, and way too frequently. As a mother, I can’t help but be paranoid. It would seem that we can’t trust anyone anymore.
I also think that women need to wise up and protect their children, instead of their abusive, pathetic-excuse-for-a-human-being husbands or boyfriends. I feel that the law should actively remove children from their unfit parents. Something must be done to prevent this from happening again.
Let us pray for all the children who’ve been lost, as well as for those who loved them. May they find some form of peace, and the strength to carry on. Let us pray that we will never have to read another report on the needless death of an innocent child ever again. Let us protect all children.
* Update 16 March 2010: Here's a link to the article on Venusbuzz. 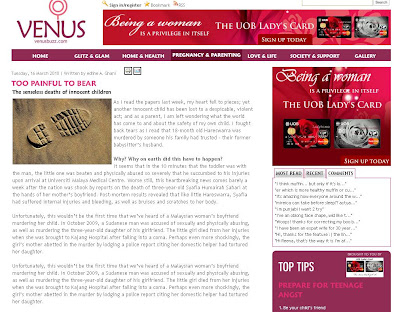 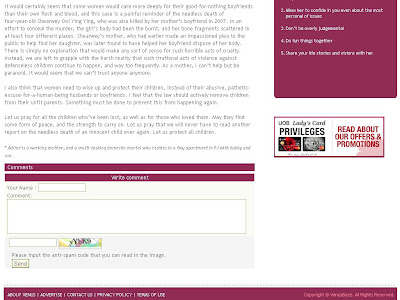