A few weeks ago, our pet hamster, Fluffy, died. Months before that, his partner in crime, Snuggly, escaped from his cage and was never seen again. Such is the heartbreak of owning real, live pet hamsters. My son, Amir, was pretty sad when the hamsters went, but it was hard on me too, perhaps more so, because I was the one who fed and watered them, and cleaned their cages.
To be honest, my son is no where near ready to take care of a pet as fragile as a hamster. In any case, to let go of the pain of losing my hamsters, and to free up some storage space in my tiny apartment, I gave away all my hamster cages, food, bedding etc. to a colleague. I swore to never keep live animals in my apartment again, perhaps maybe for some fish... someday in the distant future.

So, when I encountered Zhu Zhu Pets, which are robotic hamsters, at Jusco, 1 Utama a few months back, I was intrigued. They didn't look all that exciting just sitting in their box, so I decided to find out more about them. Most reviews I've read on them have been positive, although many parents complained that the hamsters would get stuck while in their 'habitats.'
I even looked them up on You Tube to see them in action, and they seemed like loads of fun for kids my son's age, so I decided to get one for him. After all, I had read on an American friend's Facebook wall that Zhu Zhu pets were all the rage during Christmas last year!
In Malaysia, a Zhu Zhu Pet will set you back RM59.90, and that's not including the play sets and accessories, which are pretty pricey. As we didn't have space for a full-blown Habitrail-like set up in our living room anyway, I got a Zhu Zhu equivalent of a hamster ball instead. That set me back RM39.90. I chose a Zhu Zhu Pet with dark brown fur, so that it wouldn't stain so easily. His name is supposed to be Scoodles, but Amir named his hamster 'Hammy.' 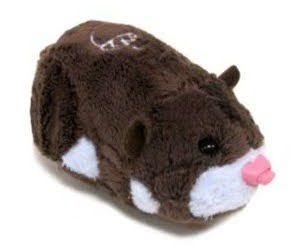 After spending an afternoon with my son and Hammy, I can say that the robotic hamster's a good buy. It's easy to operate, with just three buttons to push, which is great for kids. The button on its head makes it stay quiet. It'll make cute rodent-like sounds as you cuddle and stroke it. The button on its rump makes it 'go,' and it moves along, bumping into things, whirling around and reversing, making funny noises.
The button on its nose acts as a sensor, so when the hamster bumps into something, it reverses. A press on the nose also prompts the toy to make friendly sounds. The toy also has a tilt sensor, which shuts it down if the toy is flipped. It also goes to sleep by itself every 4 minutes or so, to save batteries. Incidentally, it runs on two AAA batteries.
And what about the accessory I bought? Well, at first, I was a little frustrated with the overpriced plastic hamster ball. As soon as I put Hammy in, turned him on and screwed on the cover, Hammy had gone to sleep, "What a waste!" I thought. But then, my son figured things out, and happily played with Hammy and his ball for hours on end... figures.
Amir simply loves Hammy, and I think six year olds are quite capable of 'caring' for Zhu Zhu Pets, who have to steer clear of hair and dust bunnies (which will clog up the wheels), as well as water and other types of dirt. I think Zhu Zhu Pets make really great pet substitutes for kids with health concerns and whose parents don't want the hassle of a real pet, but most importantly, they're cute and fun! 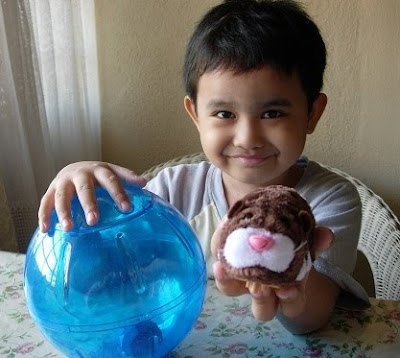 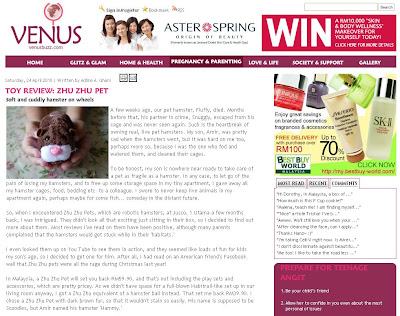 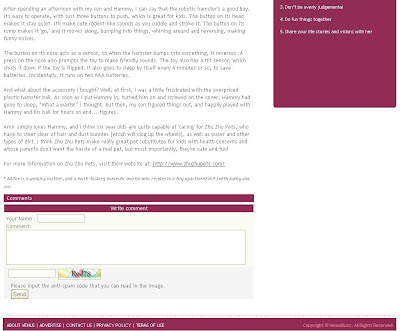